It’s not tennis or badminton, i’s not racquetball (though many often confuse it as such), it’s not even an Olympic sport– yet, what it is, is squash. The 19th century English sport that has since spread across the world to become the best workout in sporting and recreation centers across the world.

A game of endurance, tactics, and complexities; winning in squash takes more than pure athletic ability. It takes strategy, technique, planning, mid-game adaptions, and a constant sizing up of the opponent.

Here are a few game play pointers and strategies to take with you to your next game, starting with the basics and progressing into the more specific and complex techniques.

1. Pace Yourself:
Squash is a game of both energy and strength. Many matches are won not necessarily by the more equipped tactical player, but by a player that endure the pace from the first ball hit to the last. Make sure to keep in the back of your mind, that squash is not a foot race, and therefore make calculated and well-considered movements. Play the score! If you are down big in set one, then perhaps you need to consider whether or not you spend your energy on a 40-hit lung-busting rally. This same theory can be applied if in the opposite situation – if you have a big lead then you might consider skipping the unnecessarily long rally as well and pace yourself for finale. 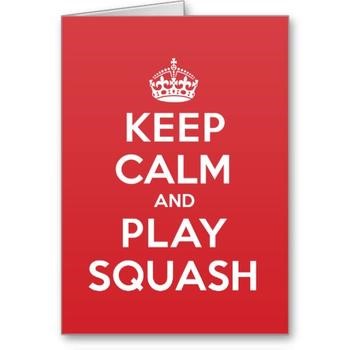 2. Exercise Patience:
Restraint is just as essential as strength, endurance and power. It is always tempting to go for that killer hit/shot, but don’t let your ego or your emotions lead you down a dangerous path. Instead, take time to build the point. Aim your shots in the corners to attempt to get your opponent away from the “T,” all the while working your way the center. Once there, wait for that loose ball, gauge your comfort, and if comfortable go for the jugular!

3. Size Up Your Opponent:
Use pre-match warm-ups as an opportunity to take inventory. Note the shots that your opponent favors and the shots/hits he makes with ease, opposed to those where they show hesitation and concentration. Once the match is under way, continue to note patterns in his play. A careful, but a quick, study of your opponents’ tendencies can give you the needed edge to know when to pull your own trigger. Also, watch their feet. Players have to move their feet before they swing the racket, and the direction or pivot of his foot can reveal whether he is going for the back wall boast or a lob.

4. Play Different People:
Nothing beats a healthy dose of rivalry. Ask Navratilova/Evert, Bird/Johnson, Manning/Brady, or James/Stephenson.There is simply something epic and poetic about beating your enemy, the same is recognised by squash players as well. Whether you are the one dealing out the “beatings”, or are on the receiving side of them, both players alike take something more meaningful out of the match when playing their preferred rival. And though frequent play with your favorite rival may lead to increased knowledge of your foe, it also limits your game to only the player at hand. Find new players so that you can learn how to win against anyone. Visit http://www.squashmatch.com/leagues.php or http://www.squashmatch.com/find_player.php to find players or leagues near you. You can learn new techniques and strategies from the new opponents you play, which will certainly come in handy when you resume the rivalry with your longtime foe.

5. Vary Your Shot Selection:
Speaking of predictability, make sure you are not an easy player to read. We all have favorite shots, but even sometimes for the sake of confusion, those too should be avoided. Squash has a plethora of shots to choose from: boasts, lobs, volleys, cross courts, straight shots, kills, reverse angles, or nicks. Obviously, most of squash is reactionary and your reflexes and current position may not allow you time to ruminate on whether to go for the Mizuki or the corkscrew, but try nonetheless try to keep your game varied.

6. Create Unreadable Swings:
In line with varying your shot selection, try to have the initial windup into the stroke of choice be uniform throughout. Hit each swing for each stroke the same, with the swing for a line drive and a boast being almost indistinguishable. Also keep your racquet up and delay your swing until the last possible moment. This will take away your opponent’s power of anticipation and cause you him to panic and make faulty guesses as to your next hit point.

7. Take Possession of the “T”:
As alluded earlier, he who owns the “T” owns the game. Make a collective effort to work your way to the “T” after each swing. Hit the ball straight along the side walls in a straight shot, and then drift to the center of the court to await the return. From the center you have access to any part of the court, and regardless of the shot your opponent hits on the return, you will always be but a few steps ahead of the competition of in possession of the “T”.

8. Cross Them “T’s”:
Lastly, improve your cross shot. Many players are undermined by an ill-executed cross shot, which will often land directly on your opponent’s racquet. Either hit the cross low to prevent the volley, or hit the cross high with the lob. Execute the cross when perhaps the line drive is more rational, surprising your unwitting opponent. Also, use the cross to stop your opponent’s lateral movement to the “T” and to leave them scrabbling to reestablish his footing.

Your squash game is only as good as your preparation. Research, practice, and make it a habit to discover new ways to approach your favorite game. For more information or added tactics please check out:
1. http://www.scottishsquash.org/images/high-performance-programme/Tactics_and_Strategy_in_Squash.pdf
2. http://scienceofcoachingsquash.wordpress.com/tag/squash-tactics/
3. http://www.squashgame.info/squashgold.php